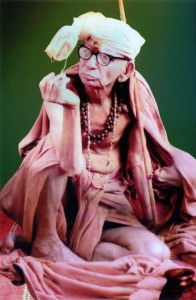 Another occasion presented itself to write about the darling of my heart, Sri Sri Chandrasekharendra Saraswathi Swamivaru, Sankaracharya of Kanchi Kamakoti Peetam, when Shri Mettur Swamigal instructed me to write something about Him worth remembering for posterity. I have to look back to my ancestral Master and glean some of the nuances of golden moments spent with the Master.

In restrospect, as I look back to my tutelage under the Master, 30 years have elapsed. My heart goes in gratitude to my spiritual benefactors.

Before coming to Master, I was a nonentity. I was blindly teaching “Complementarity Principle” in Physics.  At Mehaboobnagar in Andhra Pradesh, a blissful episode occurred. Master began to explain to people around Him, how, in ancient times, there were no conveniences like slates and books; whether it was a hot or winter day, a small hole was made in the sand and the student was made to sit in the pond.  The guru would then make the student write the alphabets.  He Himself had enacted the scene by spreading the sand and wrote something in Tamil with His forefinger; nobody could decipher anything out of it.  Master again spread the sand and this time wrote slowly.  A disciple read it as SUBBARAMAIAH.  Master pointed out a finger towards my wife telling that the name belonged to her husband!  There was a glee in His face and bliss in the heart of disciple as a permanent imprint on the “Sands of time”.

On one occasion, at Esayanur, in Tamilnadu, Master went into an outburst with me.  In my youthful exuberance, I told Master that somebody known to me was to retire shortly.  He had many commitments and pleaded with Master for an extension of service on his behalf.  Master accosted me, “Do you expect me going on helping each and everybody?”  I have come into senses.  A painful head injury compounded matters, standing lonely at Esayanur bus stand, I cursed my stars.  Here is a life rudder.  By my foolish behaviour, I felt that I was forsaken.  A short while since then, the person secured an extension.  The next time, I went to see Master, He consoled me with many many soothing words.  Just as a prey that has fallen into a tiger’s mouth cannot escape, so too, the disciple that has earned the Grace of Guru will never be forsaken.  Guru waits for an eternity for the sake of the disciple.

“Ugadi” is a day of conflict between me and Master; on the eve of the New Year’s Day, He would not condescend to bless me.  During the initial years, I did not notice this peculiar behaviour but as years rolled by it became increasingly conspicuous to me of this singularity on the part of Master. On one ‘Ugadi’ at Kalavai, Master for a change, bathed at a wayside ‘tiny’ canal and asked for the small white silk cloth brought by me, with difficulty, He tucked it around his face and waist (the legs remained naked upto thighs). With that odd and yet dazzling pure white dress, He entered Siva temple and hid Himself at one corner under the shade of “Nandivardhanam” trees; I hunted for the blessing but in vain.

Another ‘Ugadi’ occurred, this time at ‘Orikai’ village.  The then Hon’ble vice President of India, Dr.Sankar Dayal Sharma, came and went out with a beaming face caused by Master’s smiling glances of grace, which bore the stamp of happy tidings.  I waited for the much needed blessing, but Master evaded me this time too.  I did not want to stay there anymore (though I came from Tirupati to enjoy the full day with Master) and stood at the bus stop thinking Master was in no mood to oblige me.  I saw the bus at a distance taking turn and dipping into the river causeway, which would carry me into Kanchi.  One attendant arrived on the scene: “Are you Subbaramaiah? Master very much wants to hear you singing Gajendra Moksham”.  My frustration and anger melted into tender love for Master.  Afterall, who am I?, an incognito and Master is a Great Jagadguru of the hallowed Kanchi Kamakoti Peetam presided over by Sri Adi Sankara Himself.  With mock anger, I approached Master and accosted Him, “Cheppamantara” (should I recite?); Master said, “Yeh” (Cheppu). I knelt on my knees in the hot sands facing Master (Master is under a shade on the riverbed – a thin divider of light and shade) and sang with a melodious rhythm, all the time looking straight into the eyes of Master; Master too was hearing with unwavering rapt attention looking straight into my eyes.  Alas! At the end of the chant, Master is as elusive as ever.  Master has the insight to peep into the Karmic burden hanging on my back like a “millstone”; to redeem me is His deepest concern (Puttuta Eka Sunna).  Incidentally, the village owes its name over a lovely Guru-Chela Divine Romance. One day, as we are performing Adhishtana Nitya puja, Master descended from Brindavanam and caroused me very deeply (further description results in suspension of disbelief!); my wife sitting by my side observed the mystical scene and told me what she has seen.  Master is “Satchat Kruta Jagan Mathru Swarupaya” (Divine Mother in human form in all Prestine Glory)

There is no comparison for a Sadguru in all the three worlds.  A “Parasuvedi” (Philosopher’s stone) by its alchemic process converts a base metal into gold, but cannot produce another akin to itself.  But the Sadguru creates a status equal to Himself in the disciple.  “Mokshamu Galada Deviloo” it is Kanchi Kamakoti Peetam presided over by the reigning Divine Trinity (Kamakoti Triveni).

Prior to Master reaching 100 years of age, seeing Master suffering from fever, everynow and then, I used to make Samkalpa that his fevers be transferred to me.  At KamakshiTemple, I arranged 12 abhishekams for His Long Life on His birth star “Anusham”.  Just 20 days before He shuffled His mortal coil, I was allowed to see Him at His bedside at night 11 O’clock.  Master was relapsing into unconsciousness.  After 15 minutes, He came to senses.  First, He seriously looked at my wife and then turned His looks towards me; He steadily gazed at me for sometime.  I did not have any inkling that He was bidding final farewell to us. He poured ‘vibhuthi’ into a coconut shell and slipped into my hands.  He, then, relapsed into unconsciousness.

On the 5th Abhishekam to Divine Mother, my wife wanted to accompany me at the last minute.   The training was running late. We went across the road to buy Ayurvedic Medicine for Master.  By 1 o’clock in the afternoon, we reached Kanchi.  The Puja was slated for the evening.  One disciple told me that the puja was performed in the morning itself and the ‘Prasada’ was brought to Master.  He applied ‘kumkum’ to His forehead remembering my name.

Around 2.30 in the afternoon, my heart was pounding.  I moved near the screen that separated us.  As Master was gathering all ‘Pranas’ to leave the body, I was pulling Him down.  Being ‘Guru’, He had His way and being ‘Laghu’, I was a mute witness to see His lifeless body in tears.