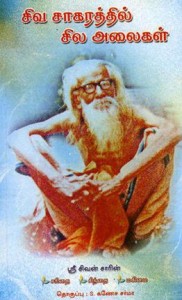 This slim volume is about the less known younger brother of Paramacharya. Sri Sadasivam, Sivan Sir as he was affectionately addressed, was a siddhapurusha, who captivated the hearts of a close-knit group of followers.

“He was born a Mahan,” Sri Chandrasekharendra Saraswati seems to have remarked. Followers of both often marvelled at the wavelength the siblings shared. They never actually thought the two were different. The author goes on to say how Sri Sivan, an ace photographer had an encyclopaedic knowledge

Sri Sivan Sir abstained from water – neither bathed nor drank a drop for years. (How can fire and water co-exist? he would laugh). He ate sparsely or not at all. Led the life of a mendicant, travelling most of the time and taking shelter in devotees’ (Padma Subrahmaniam was one of them) houses. Tiruvenkadu was his favourite halt. He indicated the passing of Paramacharya (Waking from meditation at dawn, he uttered, “The world is losing a noble soul.” The day was January 8, 1994). Sivan Sir shed his mortal coil in 1996.