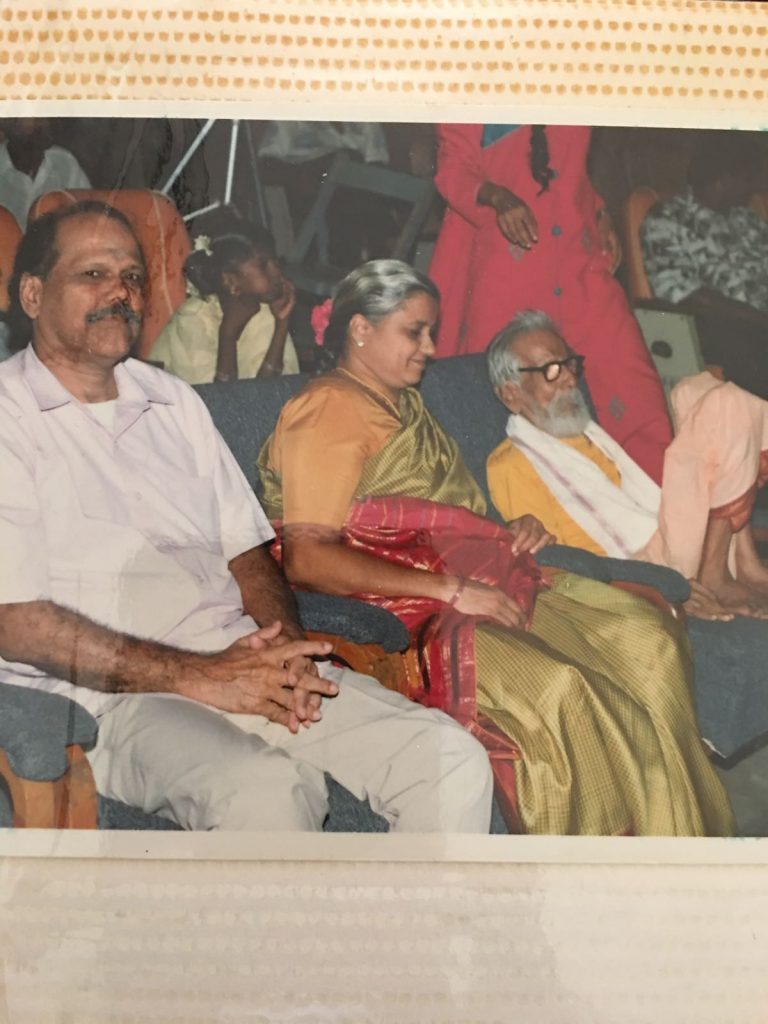 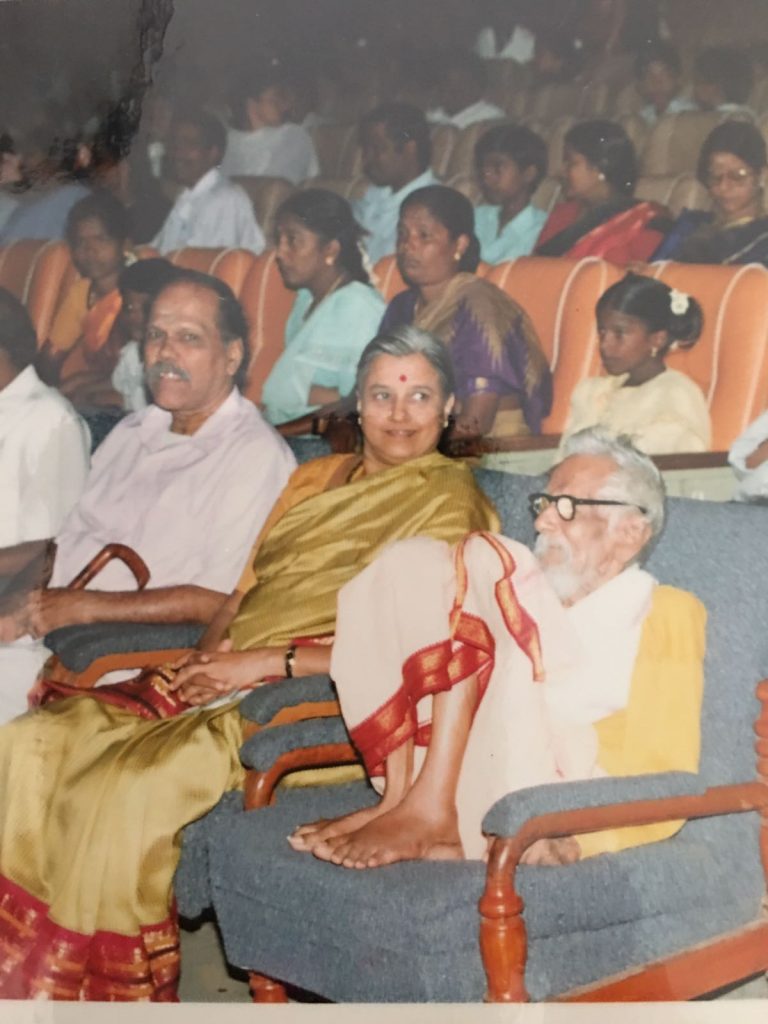 Chitra mami and Jagan mama needs no introduction as we know them through the video below:

Here is Smt Tara (daughter of this blessed couple) who is immensely blessed.

She has given her part of “Siva Saagarathil Sila Thuligal” as a write up for now (A video would follow sometime).

It is 5pm and my mother has already prepared the dough and the pooranam for poli the same way she did back in 1995. I am waiting for my 4 year-old daughter to return from school to prepare poli prasadham to celebrate and re-live the moment I had with my god Sivan Sar.

In 1995 Sivan SAR graciously blessed us by living at our Giri Road home. We were facing severe hardships during that period. Sivan SAR’s choosing to supervise our lives from our home strengthened us. Distress did not disappear overnight but with Sivan SAR by us, we knew we were all safe. It was Bogi day and amma had prepared everything for making poli. But she had developed swelling in one of her eyes and had to be taken to Sankara Nethralaya for a check-up. Upon return amma was unable to cook. It was evening time and I was sitting right beside Sivan SAR. Silence as always. As night approached my desire to eat poli got stronger.

In came one of many gracious and beautiful devotees of Sivan SAR. Mami brought a shining stainless steel bowl that was covered. She prostrated to Sivan SAR and opened the bowl. My nose and heart couldn’t be happier – it was poli! I peeked and in the bowl were perfect golden brown polis. Aroma impeccable! Mami told Sivan SAR, she just made the poli for him and sought his blessings for Bogi. Sivan SAR and mami sat in silence for some time. Sivan SAR blessed mami. Mami asked Sivan SAR to eat a small bite of the poli but Sivan SAR did not. My hopes of getting a taste of the poli prasadham faded. I was very disappointed. Mami got up and left after getting aasirvadham.

I couldn’t shake off my head my craving for eating poli!! As soon as mami left I went upto to Sivan SAR and said, “Periyava, amma has everything ready for preparing poli. Can I make it for you? Will you eat?”. Sivan SAR immediately said “O, pannu! Poi Konduva”!! (“O, Make it! Bring it”) I prepared two polis and rushed it to Sivan SAR. As I offered it to Sivan SAR, I realized I was a bad cook! I had prepared two imperfect polis! The maida was not fully cooked and poli was shapeless! Nevertheless with great pride I tore a piece and gave to Sivan SAR. Sivan SAR put it in his mouth and enjoyed the poli. Oh what blessings!

He looked around as if to spit the unchewable bits of the poli. Sivan SAR asked me “Where can I spit”? I requested Sivan SAR to spit the unchewable pieces in my palms. Little by little Sivan SAR ate my imperfect poli and my palm was heaped up with unchewable pieces. I was very excited! Sivan SAR ate my poli! I went to the kitchen where my father was and told him that Sivan SAR ate poli and the pieces in my palm were the bits he spit and asked what should I do with them? My father said, “Take a glass of water and swallow it all”. So I took a glass of water and swallowed the heaps of blessings. This conversation happened in the lowest volume possible, two rooms away from where Sivan SAR was seated with no one else around.

Next day amma and appa had gone to a doctor’s appointment and Sri.Srinivsan had stepped out for his lunch break. I was sitting right beside Sivan SAR and to my surprise he said, “Enna bhakthai nee? Naan un kaila thupinatha muzhingaetya?” (“What kind of a devotee are you? You swallowed what I spit?!”). I was speechless.

A regular person couldn’t have heard or seen what my father and I whispered two rooms away. But it was Sivan Sar, not someone ordinary. He knows everything. When our living itself was tough, Sivan Sar chose to be with us to enable us to sail through the karma destined upon us. When there were other sincere devotees who had servants, cars and independent space at Sivan Sar’s disposal, he was with us in our home.