HomeDevoteesDevotees Experiences - ArticlesI am there, I will take care of that child!

Most of us would remember the soul touching experience Dr Ravichandran and his family had with Sri MahaPeriyava… His daughter, Madhu who is immensely blessed by HIM shares a few words…

My name is Madhu and my grand mother’s Athai’s daughter is Pollachi Paatti.

Once Pollachi Paati told Him that I am suffering and fighting for life due to the disease called Hemangioma which is an abnormal buildup of blood vessels in the skin or internal organs. The symptoms of which are a red to reddish-purple, raised sore (lesion) on the skin. The doctor had also given up and said I cannot survive. 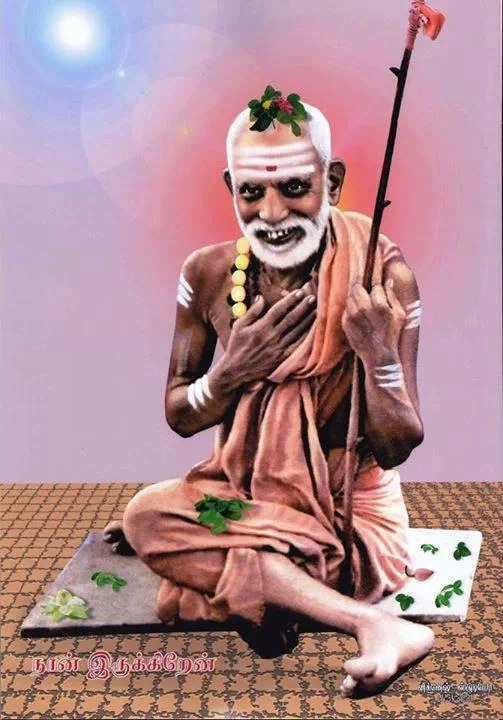 Then Mahaswamigal told my Paati, “Naan irrukken.. Naan andha kuzhandhaiyai paathukkaren… I am there, I will take care of that child!”From the moment That Sarveshwaran laid His eyes on on me all my physical problems slowly started disappearing and I became alright gradually.

I do remember Mahaswamigal enquring about me with kindness, “How are you?” ie “eppadi irukke?” He also used to give me orange prasadam. I do not remember what I spoke to Him. But my grandmother and others say that I used to converse with Him like a friend sharing all my feelings. Like, “I have pain here, and You have to save me! Some people are asking what is on my face and are making make fun of me etc..” He just listened to me and said, “Do not worry, My child!”.

Once when I was much younger, Mahaswamigal rolled Kalkandu from the window. I quickly grabbed and touched his hand by mistake. Everyone was shocked but He did not do Snanam and said, “No problems!”.

I was ten years old When He attained Siddhi. I felt like my heart had stopped for a second when I saw Him being placed in a chair after His Siddhi.

My son was born last year. I had prayed to offer Elakkai garland at His Adhistanam after his punyajanam ceremony. But since I was awake the whole night for my baby I could not do that. So I was a little upset that I could not make the garland. When we finished dharshan at His Adhistanam, we got the blessings of Bala Periyava also.

At that time He called us again and gave us an Elakkai Maalai. I was simply stunned and I just wept. How did Bala Periyava come to know about the Elakkai Maalai?… Sarveshwara.

Then I believed in true devotion to our Gurus Mahaswamigal and our Periyavas. They will never let us down. All we have to do is to hold on to Their Lotus Feet tightly, whether we are sad or happy.

My parents, husband, my child, my extended family and every person that I meet in my life I see them in the form of Mahaswamigal. And He is right there to protect me wherever I go.