The moment she came to Periyava’s Sannidhi, she broke down in tears! She wept, wept & wept.

Smt. Indira Gandhi was having His darshan at Sankara Mutt, Satara after her imprisonment and her success in election. She wept, wept & wept… perhaps, out of Anandham that fills anyone’s mind in Periyava’s sannidhi. She had determined to make things right and here is her MASTER… 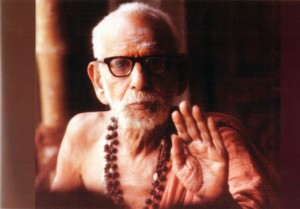 She was seeking some order from Periyava now. What was that…..?

She had requested Periyava’s darshan saying that she was coming for spiritual reasons. She first sought guidance on those lines. After that she was seeking Periyava’s permission to arrest a pseudo God Man. Periyava answered saying…

As per advice of Periyava, the person in question wasn’t arrested in India… But, he was later arrested in North Carolina in 1985 by the Federal authorities. Since then he became highly popular and continued to be so even after his death.

Now, Smt. Indira Gandhi was questioning how the common man will know who is false & who is genuine, if they’re not arrested. Periyava gave an example for all of us to understand…

She was convinced with the answer and she left. One of the communist papers had written saying Smt. Indira Gandhi has been wasting public money for such visits. On reaching Pune airport, reporters were asking her response to this comment …

She had no hesitation. No pseudo-secularism… so no mincing of words… She instantly responded that taking blessings from such a Mahaan is indeed the basic need of the country for it’s well being. She has also said that H.H. is not only a spiritual giant (Aathmeega Gnani) but also an “International Genius”. There is no matter in this world that he didn’t know or he didn’t handle and we take guidance from him. She then left Pune.

Once she told Sri Venkatraman then President of India about her experience… She said, “H. H. Speaks in silence” What a feeling she was blessed with. Nearly 7-8 times, Periyava had refused an appointment for her (by asking her to pray where she is) but she pursued, pursued and got darshan out of her bhakthi and Periyava’s karunyam.

Article Courtesy: Thanks to Sri Rathinam for this wonderful posting.