Any writeup about VRNT without mentioning Sri M Subbaraman mama, retired income tax commissioner Mumbai is incomplete… Sri Subbaraman mama took the mantle from Sri Annadurai iyengar mama as executive trustee for VRNT. The history behind Sri Mama taking over VRNT is itself history. To his selfless and tireless efforts, the Sri Matam bestowed upon him Veda Rakshana Kaingarya Mani… 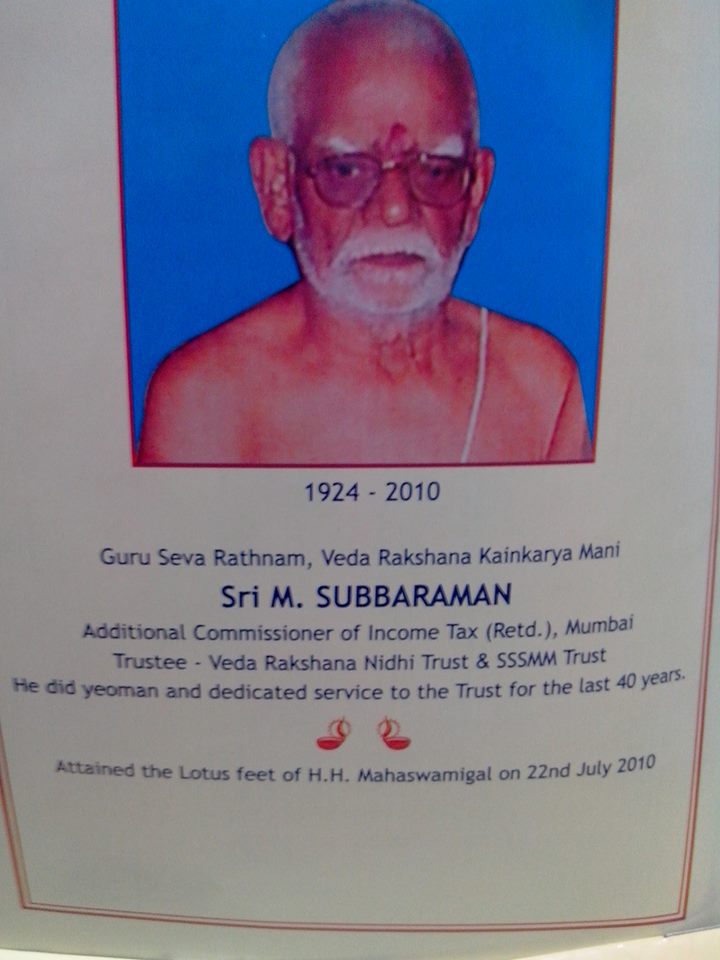 Here is the audio of Sri Subbaraman Mama sharing his experiences with Sri MahaPeriyava on the auspicious Anusham day in 2009 at Besant Nagar Patasala. The introduction speech in this audio is given by Sri K.R.Athamanathan (fondly called as Athma mama). Taking care of M.S. and Sri Sadasivam had been the top priority for Sri Athma mama. He is also known for his selfless efforts in steering Sri MahaPeriyava Manimandapam in Orikkai. “Athma Romba Usathi Aanavar” – Sri Sivan SAR once remarked about Athma mama to Sri Supni.

Dreams before the death of Smt. Subbaraman shared by Sri Subbaraman Mama :

I would like to share my experience before my wife’s death on 27 March 1997.Just three days before her death, PeriyavA, who had thrown away His mortal coils in January 1994,appeared in my dream and stated that He was going to perform a havan ‘homam’ for my wife.She was in the hospital at that time.It is an established rule that sanyAsins should not touch fire.My immediate reaction was,” How would PeriyavA perform a homam, when there is this prohibition and PeriyavA is a strict follower of the shAstrAs?”.It never impressed on me that what He proposed was for the benefit of my wife.The scene shifted from my residence to the hospital.There, on the bear ground, PeriyavA placed a cow-dung cake,lit the fire while chanting some mantrAs, turned to me and said it is the body that dies and not the Atman, and disappeared.My wife died on the third day.I took it that PeriyavA wanted to tell me that I had been attending to the duties that He had allotted to me, and in return He had performed the last rites of my wife and that He had taken care of her soul. (We have no children of our own). This inference of mine was confirmed surprisingly from a different source.

My younger sister and and I had been to Srirangam where my wife’s aunt, aged 94 years was living.She told us that on the day my wife died,she had a dream in which my wife came to their house in Srirangam,When asked why I had not accompanied her,she replied that she had to come alone and had come accordingly.When she took leave of her aunt,her aunt offered to accompany her which my wife declined to accept saying that she had to go alone.When they reached the door-step, her aunt found a chariot (ratham) waiting for my wife.She boarded the ratham and went away.This confirmed that Periyava had taken care of her.