“Satara” – this name sure does bring Nostalgia to so many devotees of Maha Periyava who were immensely blessed to be with Him and/or have His Darshan during His stay there… We all know Shri Uttara Chidambaram Nataraja Mandir at Satara was a Divine Plan. And Maha Periyava executed that ordained plan with great patience and total personal involvement, guidance and dedication. Hence, the Mandir is rightly come to be known as MahaSwamigal’s Shri Uttara Chidambaram Nataraja Mandir. How?

Maha Periyava’s abiding devotion to Nataraja is well known. His visit to Chidambaram to have the darshan of His Nataraja in 1933 was a historic one.This visit also marked the end of a prolonged draught of visits by Shankaracharayas. Close associates were witness to a hair raising glowing radiance exhibited by Maha Periyava after He emerged once from an almost four hour closed door confabulation with the then chief priest of the Chidambaram,Shri Swarna Venkatesh Dikshitar.

Ardent devotees of Maha Periyava believe that The Nataraja Mandir, Satara is a completion of a long cherished inspiration of Him to replicate the Chidambaram Nataraja during His maiden visit to the Temple in 1933 …

Since then during His Padha yatra through various places, did Maha Periyava bore a searching mind to spot a site with significance for the construction of His Nataraja mandir. Or, did He already have Satara in vision but had waited for almost five decades till His last Padha yatra? Only He could solve this Rahasyam!

One nagging question has been, why did Maha Periyava select Satara? Was it because it is uniquely placed as the last Uttara point of South India as envisaged in the Shilpa Shastra of the Vedas? Or, was it because Satara is where the confluence of the holy rivers Krishna and Venna takes place before they turn eastward as Krishna-Venna? Again, only our “Nadamaadum Deivam” can solve this Deiva Rahasyam!!!

Back at Kanchipuram after His Padha Yatra, Maha Periyava did not for once lose sight of the Nataraja Temple at Satara. It was His continued involvement that brought the Governments of Maharashtra, Karnataka, Andhra, Tamil Nadu and Kerala to participate in the making of the Mandir. Also, it was He who took the initiative and solved the otherwise impossible “Chidambaram Rahasyam” ,taking into full confidence an expert team from Chidambaram that was vowed to total silence and absolute secrecy. Further, He conceived each and every one of the unique 108 Karnas that have become a hallmark of the Mandir.

With His immense Blessings, the first Mahakumbhabhishekam was traditionally and ceremoniously held on 9 June 1985 and the Mandir was declared as “Shri Uttara Chidambaram Nataraja Mandir” 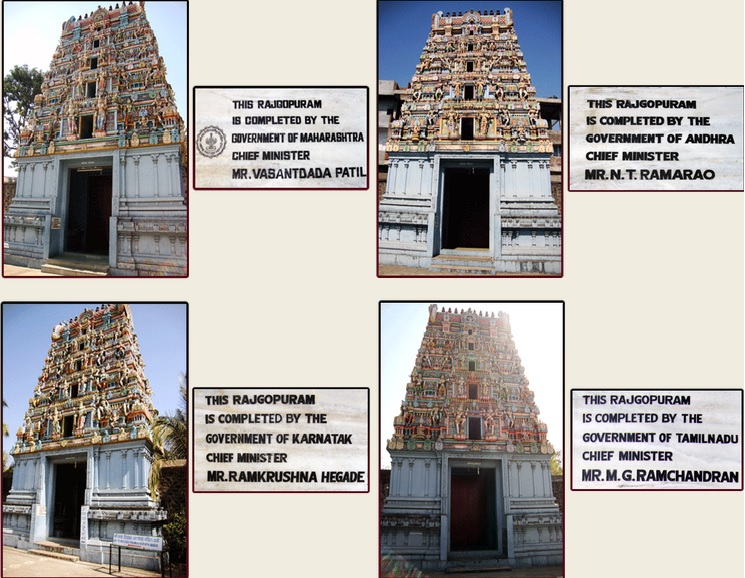 “It is Periyava’s grace that keeps us going”, echoes reverently Ramesh Shanbhag, the eldest son of Late Shamanna, the founder trustee of the Mandir. Any wonder that the Mandir is etched in the minds of lakhs of devotees thronging it as Maha Periyava’s Nataraja Mandir? And thus the vision and mission of Maha Periyava lives on…

Maha Periyava deputed one of his disciples Shri Jagadeesh Bhat, who has been entrusted with managing the day to day workings of the completed Mandir since 1985. Here is a video (published couple of years back) of Brahmasri Satara Jagadeesh Bhat who shares his experiences with Maha Periyava…