Sri Gopala Iyer, a senior ‘Sevaka’ and Sri Kannan Mama were the only two remaining at Periyava’s sannidhi at that time. It was bit late in the night.

Hearing Periyava asking them to do Namaskaram, both of them realized they both got into some trouble… They came forward and did namaskaram to Periyava.

There is a Slogam about whom should we sing praises of and when to do so… When it comes to Guru, we have to sing his praises both at His presence and at His absence. When it comes to a friend, we can sing his praise in his absence… Periyava went on explaining this… The longer it took, sevakas felt the worser thinking of the trouble they had gotten into. They were just recollecting all that happened in the last few days…

One day, Sri Gopala Iyer talked to Sri Kannan Mama. The ChAtur-MAsyam was scheduled at Orikkai. It was 60th year of Periyava. Some proposed ‘sashtiapthapoorthi’ for Periyava but HIS reply was a stern “NO”.

Sri Gopala mama said to Sri Kannan mama, “Periyava is not agreeing to His Sashtiapthapoorthi celebrations. Why don’t you and me join and do something? Let us write a letter to all the important people who come to Sri Matam. Let us tell them that Periyava is not agreeing to celebrate this special occasion. But, you all need to come forward to make this event happen. Let us arrange for 11 silver “Kudam”… Let us also arrange for “Dakshina” to be offered to 60 brahmanas… ”

Sri Kannan mama continues, “For food and other arrangements, we ourselves came up with a plan and wrote all such details in a letter to all important people. We didn’t say anything about this to Periyava… I and Gopala Iyer wrote this letter with lots of enthusiasm. Sri Gopala Iyer gave all the postal addresses. He is much senior than me in Sri Matam. He had been to lot of places to meet many people regarding Sri Matam Kaingariyam. We drafted the letter, signed them (in both our names) and sent it across to the devotees… We didn’t do it under Sri Matam letterhead.

Few Devotees immediately responded, “Not to worry and they would come and conduct in a befitting manner”.

About 10 days before the occasion, they approached Periyava again…

They said, “For YOUR Sasthiyapthapoorthi, we wish to do celebrate it in a Vaidika manner… What use of us being your sevakas and not doing anything?”

Periyava replied, “No need for all such things… Why would Sanyasi need all such celebrations?”

So the reply from Periyava was negative again. But they proceeded secretly & were putting up bit large ‘pandal’ in few places, as they expected larger crowd.

Seeing all the arrangements, Periyava asked , “Why are tents being put up?”

Sri Kannan Mama and Sri Gopal Mama looked at each other… They responded, “The skies appear cloudy… People who come for Chaturmaasyam may need places to stay… slowly dragged the answer. Because during such times, at least 30-40 ‘paatti-maa’ used to come and stay during the ‘vyaasa-pooja’. Though they would prepare their own food (‘swayam-baagam’) as per their ‘achaaram’, Sri Matam used to give ‘arisi’, ‘paruppu’ (basic provisions) in a plate daily. So both the Sevakas were counting on that point.
Periyava didn’t raise any further questions and simply moved over.

But , they were caught in a tight spot once all those devotees arrived 2 days before the occasion!

Periyava asked the devotees, “Why have you all come together now?”

A very unusual question looking at the unusual assembly of devotees! Everyone looked at each other…

Collectively the devotees who had come, replied, “On the occasion of YOUR 60th birthday, we the sishyas would like to do something…”

Periyava said, “Instead of doing Sashtiapthapoorthi for me , why don’t you all offer small land and form a trust? Whatever proceeds that come from such lands can be given to “Veda Bhashyam”… That’s the desire I have”…

“Desire, that too for Periyava?”, Every devotee present there were amazed to hear about a desire for Periyava which was never heard of, by them before. Next few words brought their thinking back!

Periyava said, “Everyone offer small portions of land… That is important!”.

They responded in a candidness and devotion to conduct Shashtiaptapoorthi, They said they will offer the land and also celebrate Periyava’s Sashtiapthapoorthi,

Finally, Periyava agreed. All arrangements were done in 2 days for a simple but grand occasion. Simple because of just a ‘keethu-kottaai’ in Orikkai village. Grand because of the devotion and the ‘anugraham’ that was flowing…

“The occasion was celebrated in a grandeur manner”, recollects Sri Kannan Mama with so much joy…

Just opposite to the venue (Keethu Kottaai) was a mangrove. A pandal was put up for food arrangements for the devotees. Periyava had come to that venue after the event. “Mangoes were heaped like a mountain and Periyava wanted to sit on top of that:…

Since it may skid off, Sri Kannan Mama and others arranged to pluck the stems and put a ‘asanam’ over the mangoes.

Periyava got up and sat… Sri Kannan Mama recollects with so much surprise while detailing the event.

Then, Periyava turned round and round and gave the mangoes as prasadam to everyone who have visited. (Ah! What a blessed devotees they are!)

Once all the devotees got their ‘prasad’ and took ‘utharavu’, finally Sri Gopala Mama and Sri Kannan Mama were they only two present there. It was bit late in the night.

Periyava said, “You two do Namaskaram to me!”

Hearing Periyava, both of them realized that they both were got into some trouble… Both Sri Gopala Mama & Sri Kannan Mama surrendered.

In order to prevent them further from activities, Periyava sternly said, “This is all wrong, do not repeat it…” and Periyava let them go, sighs in relief Sri Kannan Mama.

What would equal the ‘Sevakas’ who had served the Sri Matam without anything in return and only for the sake of their Periyava!

Koti Koti Anantha-Koti Namaskarams to them all! 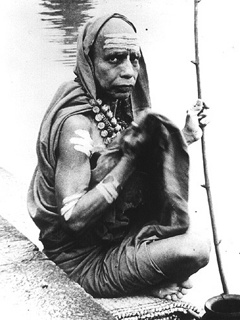