A young man came from Andhra Pradesh. He was mostly speechless and seemed to be in ‘Brahmai’. His Kith and Kin accompanied Him to have darshan of Sri Periyava. They were standing almost all the time from morning to evening in the camp.

“They are all Andhra people… This young boy is doing some ‘mandira japam’ … Periyava has to bless him…” , the Sevakas pleaded.

Those group of people were standing there since morning… We had to send them off, recollects Sri Kannan Mama.

Later that young man became one of the most famous spiritual personality. He was Sri Ganapathy Sastrigal from East Godavari District. Thousands of devotees came to him. He constructed a huge Temple for Sri Anjaneya Swamy in AP. He had been the ‘(Raja)Guru’ for the Chief Minister at that time, Sri NT Rama Rao. Everything happened only after HIS “Kadaksham” fell on him. It was the ‘Krupai’ of Periyava.

Whenever Sri Sastrigal came to Sri Matam, his offerings used to come in big piles. Probably, that his how he showed his benevolence to Sri Matam. The Devotee knows and their Periyava knows!

Her Majesty Queen Sofia of Greece, grand daughter of the famous Kaiser Germany, came to know about Periyava through TMP Mahadevan and she came for darshan. Being a Diplomat coming officially to India, the Queen had informed Indira Gandhi who was then the Prime Minister of India.

Sri Kannan mama recollected an incident during the Queen’s maiden visit to the Sri Matam for darshan of Periyava.

“If one had already become an adult what is the option?”, The Queen asked in response.

“Meditation (Dhyana) is the only way! Mediation will give realization!”. You can elevate through Dhyana answered, Periyava…

All the conversations happened through Sri TMP Mahadevan and  Sri Kannan Mama. The Queen came quite often and had progressed considerably! The Devotee knows & their Periyava knows!

King Gorbade of Santur asked about ‘Pranayama’…  Periyava quickly told some numbers, which only he & Periyava would know. No one else could understand.

Similarly, after Emergency Smt. Indira Gandhi was defeated. After her darshan of Periyava she returned to power. Then she wrote stating that she had been coming ‘only for spiritual reasons’! She did clarify her queries and doubts about some of her practices with Periyava and the grace of Periyava blessed her too. Again, no one can understand what they are. The Devotee knows & the Periyava knows!

Professor from Andhra Pradesh who used to come often, came to Thiruvidaimarudhur. He asked Periyava about Siddhar & Siddhi and questioned “whether it is true that they can do anything?”. Periyava advised him to visit a Swamiji near Sri Sailam during ‘Pournami’. He found that Swamiji was lame with both legs amputated below knee. But when the Professor was hiding and secretly watching during ‘Pournami’, he witnessed that it Swamiji’s legs appeared. Swamiji identified the hiding professor and took him with courtesy to the water-falls nearby for a midnight bath and accompanied him back.

In the morning, when the Professor took leave, the Swamiji said, “யோகைவ யச்வேச்சயா!” (“Yogaiva Yasvechchayaa!”). Professor came running straight to Periyava’s camp in Thiruvidaimarudhur. Couldn’t figure out where that term came from or what that meant. Periyava asked him “whether he knew Sri Dakshinamurthy Ashtakam’? Quickly, Professor realized that the Swamiji was referring to Periyava as Sri Dakshinamurthy, one who blesses all ‘Siddhi’. Who knows? The Devotee knows & their Periyava knows! 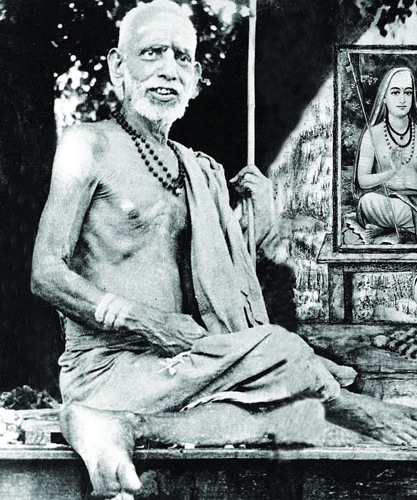 Be it Mandira Siddhi or Yoga Siddhi or what not, Periyava knows everything… There is no such thing that Periyava is unaware of, excites Sri Kannan Mama after recollecting all these incidents.

Everyone felt that it is their Periyava! Closer to them than anything else in the world! Don’t know what else to say other than…The Devotee knows & their Periyava knows!

Prayers to become like such devotees…in one ‘Janma’ or other, with the grace of that…
Prabhu! MahaPrabhu!
Periyava! MahaPeriyava!