He had only Lord Sri Guruvayurappan and requested for Periyava (as photo). Then kept both ‘Dheivam’. Sri Kannan Mama had gone for procuring Teak Wood for Satara temple. It costed around Three Lakhs Rupees on Government Rate (it could be even more expensive from outside sources). Mama prepared an application and submitted to Sri Karunakaran, then Chief Minister of Kerala.

That is when Sri Karunakaran was telling Sri Kannan Mama, “Periyava is God Himself!…!”

Though Sri Karunakaran was the Chief Minister, it was a complex coalition government where anytime anything could be a surprise. The board managing the teak wood disposal was headed by a muslim coalition party. So he was bit doubtful about the outcome of the application. This is an examination to him…

His secretary Mr Gopalan prepared and forwarded the paper. Within 2 days, the application came back with a ‘note’ by the muslim member. So Sri Karunakaran called Sri Mama through Sri TV Swaminathan…

The applicaiton was sanctioned. It had a special note on file. “Sanctioned, as a special case…”, the note read on the file, written by the muslim member.

Sri Karunakaran said, “What else we want !”, pointing to the clause called ‘special case’. And with excitement he added,’special variety’.

Delivery was ordered at Ariyangavu Depot, which is closer to Railway station. Sri Kannan Mama and 2-3 people went together to Ariyangavu Depot. Forest Officer who was responsible to dispatch the teak responded that it may not be possible for them to take a self delivery. The reasons quoted were quite difficult to overcome by them. They seemed to be stuck, not knowing what to do.

At the warehouse there, they had to arrange for the truck. Bunch of people from the Sri Matam had gone. No one knew the language or the area to get a truck. (“Periyava’s anugraham runs before us…”, always recollected by Sri Kannan Mama). Suddenly, a truck came there asking, ” any job for us”.

Everyone were surprised. Now, the Forest Officer aid, “even if Lorry is available, there is no elephant to load them onto the truck right now…”. Again they seemed to be stuck, not knowing what to do.

Then, suddenly four elephants came down from the hills.. Those men asked whether they have any job…”. Now, it was the Forest Officer’s turn to get surprised. 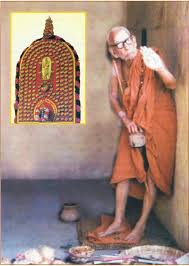 Sri Kannan Mama recollects, “all happened within few minutes.. Who is going to believe?” !!!

Once they reached the station, they found that wagons were waiting for 3 days, arranged by Sri Vaithilingam, a devotee of Sri MahaPeriyava at Chennai Railways. Station Master readily accepted the teak wood and sent them off with a Namaskaram.

Later, two Dwajasthambam were requested, as per Periyava’s ‘utharavu’. They were also sanctioned. For all such projects at Kerala, Sri Swaminathan was instrumental (at Periyava’s hands), appreciates Sri Kannan Mama.