Periyava was camping in Pandharpur. One has to take a bus and then cross the Chandrabhaga river by boat to have His darshan.

It was a rainy season and the river was brimming with the water. It was eight in the night when we got down from the bus. The sky was overcast with rain clouds, and it was drizzling. We wanted to cross the river and have His darshan.

The boatman did not oblige. He said in Marathi, “It is dangerous to cross the river now. You can go in the morning”.

We requested again, “We need to have darshan of Swamiji…”,

Boatman said, he has been doing this job all his life so he knows all about the river and it is not advisable to cross the river now.

River is flowing full and it was quite dark… but how to have His darshan now???

We requested again, “We need to have darshan of Swamiji…”,

Boarded onto the boat. Not much of conversation. In a pitch dark night, fully flowing river must be bit scary for anyone especially after a warning from boatman himself. But somehow the ‘thapam’ to have His darshan blinded everything.

Paying for the boat ride is the usual thing to do. After reaching the other bank, I stretched my hand with the fare to him, but he refused, “Nahin” – No, I won’t get money!” Well, Isn’t the amount not enough? If not money, what else did he expect?

Boatman revealed what even strenuous ‘thapasvi’ found it difficult… “Shankar guruji is our eye-witnessed Deivam – GOD! Lord Pandarinatha Himself!”

Once, Periyava had called the boatman and talked to him . Wow! What a blessed person he was!

He explains his heart felt experience. “He called and talked to me. It was like ViTTal himself coming over and talking to us!”

Earth-ruling kings and well-read pandits adore Periyava. Here is so called ‘an illiterate’, adores him!
Wondering, How can this be? Giving up the idea of finding an answer, I am falling at the sacred feet of Periyava, doing vandanam – reverence, to him. Perhaps is this the answer?

Only that viDaiyERi–Bull-Rider, knows it !!! 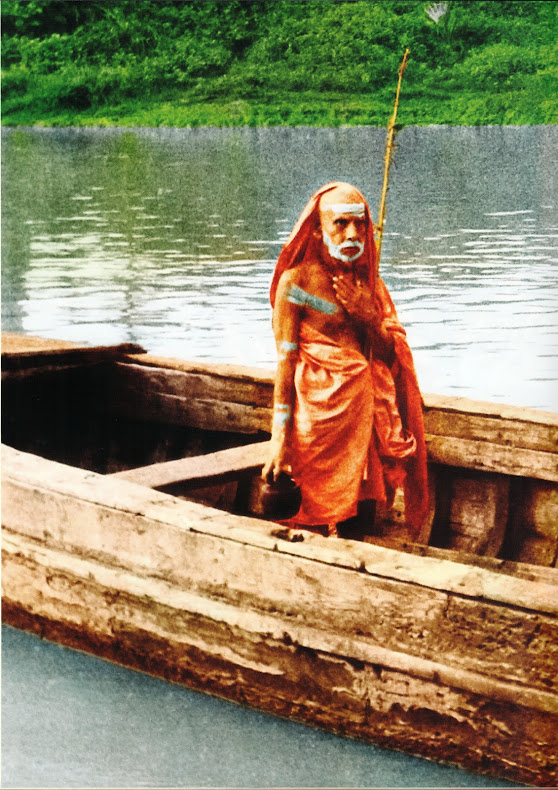 Is it that only a boat owner would know about another “Boat Owner” (to cross the ‘samsara sagaram’)? We don’t know. We only want Periyava darshan…

In any case, Periyava (The Boat Owner for crossing the ‘Samsara Sagaram’) has told us that the ocean is flowing full of ‘maya’ and therefore dangerous… We don’t know. We only want Periyava darshan…

Prayers to Periyava to accept us into the boat and take us across or to His abode or wherever…
We don’t know. We only want Periyava darshan… Let that eager blind everything else!