The moment Sri Viswanathan Mama’s turn came up in the queue, Periyava shut the doors. Not just once but thrice. Sri Mama was in tears.

Earlier, when he came to Chennai to see his pregnant wife, doctors gave a shock and they themselves were puzzled about her surgical delivery. In their own words, “Baby or Tumour?” [“கட்டியா? குழந்தையா?”], was their confusion. Mrs Viswanathan was having a giant size tumor along with the baby. She was at Kalyani General Hospital, a renowned hospital of those yesteryears. Doctors were contemplating which one to remove first (baby or tumor) and how one would affect the other. The team of doctors include even a senior visiting doctor from USA!

Sri Viswanathan Mama rushed to Periyava’s camp at Vanagaram without even having his food… He rushed to camp with the high hope of having the ‘theertham’ from Periyava’s hand.

One has to go empty stomach for getting ‘Theertham’. So Sri Mama rushed and reached there by 10.30 am only to hear that Periyava already began giving ‘Theertham’. His anxiety increased to several levels.

Mama saw many devotees waiting for Periyava’s darshan including those who did “Bikshavandanam” to Periyava on that day.. Does that mean Periyava completed His ‘Biksha’ after the distribution of the ‘Theertham’? Sri Mama was standing in a hurry-burry with a pleading heart to Periyava.

When Periyava called Sri Mama, everyone inside were surprised and looked at Sri Mama. Sri Mama jumped and rushed to Periyava like a calf running to the mother Cow. Periyava gave ‘theertham’, “Have this!” [“இந்தா வாங்கிக்கோ!”]. Sri Mama’s mind became peaceful.

Sri Mama felt that Periyava knows. So he obeyed and left the place.

Someone called him for lunch and Sri Mama had his lunch. About 3:00 pm, Periyava began to give darshan. Again there was a queue of devotees standing. So Sri Mama went and stood there. Anxiety skyrocketed when his turn came but Periyava quietly shut the doors. Sri Mama’s anxiety about ‘Baby or Tumour’ [“கட்டியா? குழந்தையா?”] reached its heights.

Within few minutes, again a queue of devotees were having darshan of HIM on another side. Sri Mama rushed to that side and…and…when his turn came up, again the door was shut!

And it happened 3rd time too and Sri Mama burst in tears before reaching a side because he knew that it was done purposely. Innocently, Sri Mama queried to a Sevaka nearby, “So Periyava won’t give me darshan at all?” [“அப்போ, எனக்கு தரிசனமே கொடுக்க மாட்டாளா?”]

Sevaka has said… “Periyava will talk to you personally that’s why this is happening. So don’t give up your heart and don’t leave this place. Wait & have darshan…”

Sri Mama waited with a ray of hope…

Once the crowd dwindled, Periyava looked out! Periyava’s eyes cited Sri Mama and HE called mama. Again, like a calf Sri Mama rushed and submitted his prayer about the complications with his wife’s pregnancy.

Periyava asked a simple question that could shake anyone who is righteous.

We may easily say, “Lack of ‘karunai’ (mercy) from Periyava!”. But Sri Mama came from a ‘Dharmic’ lineage so his reply was ‘Dharmic’ and equally simple…

Such prayers might have been flashing in Sri Mama’s mind.

Sri Mama uttered in surrendering mode, “I’m suffering… I’m crying… Praying for Periyava’s prasadam, which I’ll give to my wife… I don’t know anything else…”

ParamaDhayAlu looked at him. Ha! What a gracious look that was!
“It will just melt us away!” [“அப்படியே உருகிப் போயிடும் நமக்கு!”], says Sri Thiagu Thatha.

Periyava gave prasadam! Is there anything else in this world that is equal to Periyava Prasadam to resolve us away from our ‘prArabdham’.

It indeed did a miracle, literally. At Kalyani General Hospital, the tumour that doctors were debating over to take a decision, had actually vanished! Yes! Vanished! All the doctors including the visiting doctor from US were puzzled.

The baby girl born was named after their hospital – ‘Kalyani’ by those doctors.  Today, after all these years, She lives as a testimony for Periyava’s ‘anugraham’.

The shaken faith of Sri Viswanathan Mama even after Periyava shutting the door on him thrice was answered when Periyava looked out of the door and called him. 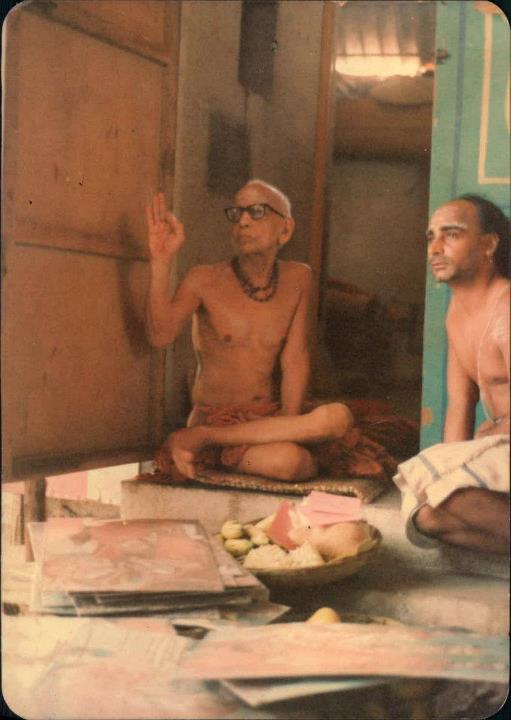 Ho Periyava! Hey JaganmAthA! Even now, most of the time, when the doors are shut, we could feel our faith on YOU getting shaken, but YOU , Kaarunya murthy, always open the door for all the better.