Once, a Vidyarthi doing Vedha Adhyayanam in a patashala belonging to Sri Matam came to Periyava. Just wonder, what could have been his response to Periyava, when Periyava asked him “Do you have Bhakthi on me?”. Can he say “No!” and still get what he wants???

A Vidyarthi studying in Sri Matam’s Patashala in Thiuvidaimarudhur was asked to leave the Patashala. He came directly to Periyava in Sivaasthanam. It was the year 1971. Periyava asked him “Why were you asked to leave?”.

“I haven’t done anything Periyava! But I was still asked to leave”, Vidyarthi responded. Periyava asked, “Enna panne?” Slowly, Vidyarthi said, “I made idly and ate.”

There were about 50 devotees there. Periyava enquired why should a Vidyarthi make idly? Aren’t they providing idly at all in the Patashala? Periyava also begun a lecture about ‘Idly’… Here HE goes on and on…

How much rice is required?
How much ‘ulundu’ is required?
How long to get it soaked?
…
…
He was continuing with so many details as if one could do a PhD in making idly! Imagine the vidyarthi’s state of mind!

Periyava paused and said, “Let it go. Now, you go to Nanganallur. Gowrikanthan, an auditor has started a new Patashala but was concerned that there aren’t many Vidyarthi(s) in there…”

Periyava continued… “Don’t do any such thing there!” Vidyarthi was listening. “They themselves will be providing idly.”

Vidyarthi listened to Periyava and went to that Patashala, joined there and continued his adhyayanam.

Usually on a Pradosham day, every Vidyarthi will go to Periyava for reciting Veda but not our Vidyarthi. Suddenly one day he had severe stomachache and diarrhea. Doctor’s medicine didn’t seem to work. His teacher approached Periyava and informed about the state of Vidyarthi. Periyava heard that and put His hand on His stomach and did something. At the same time, our Vidyarthi became alright.

Days passed. One day, this Vidyarthi approached Periyava for His darshan. SriKantan Mama was on duty.

SriKantan Mama conveyed what the Vidyarthi said. Only the heart with ‘nermai’ will get ‘Bhakthi’. Periyava knew that very well, still His drilling questions continued… 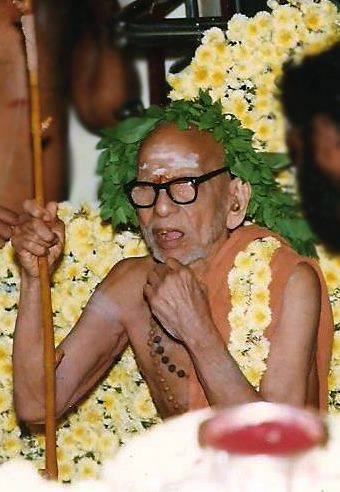 Periyava blessed the vidyarthi. From then on, vidyarthi has been able to read any books and get them recollected without fail, till today.