A Rare Photo was published two days ago here. 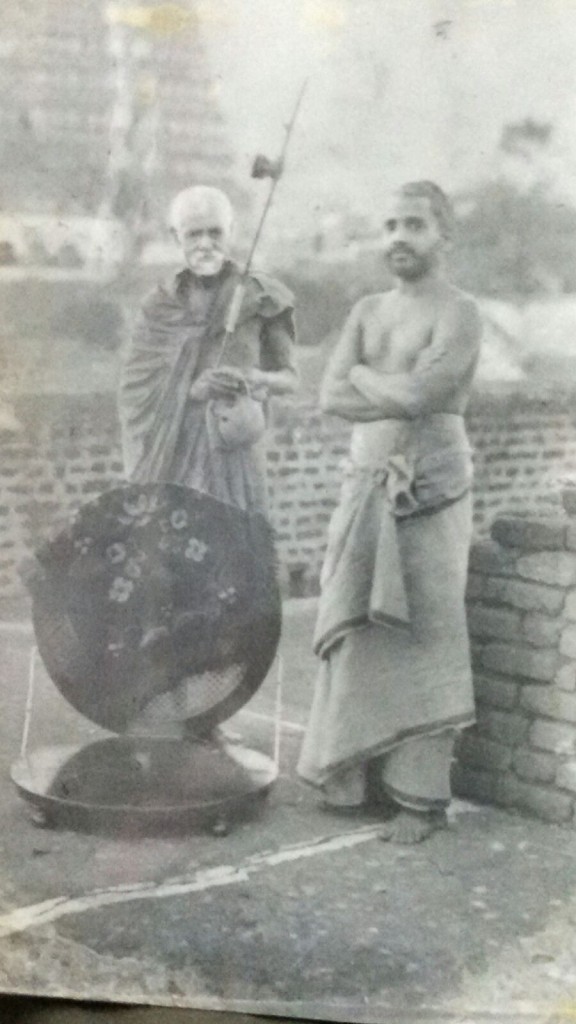 All these questions are answered below :

Sri Ganesa Sarma mama explains further in this small video below. Please scroll down for the English narration on the same:

Here is a gist of the interview recorded with Sri Ganesa Sarma: ” Many people wanted to know regarding the person standing in the accompanying photo- Is this Periyava (means Sri Chandrasekhara Saraswati Swamigal ) ? Yes it is very much Periyava. The Swamiji standing next to HIM was known as Marathi Swamigal. This photo was taken in December 1929, when Periyava was 35 years old then…This was taken when Periyava came to Thiruvannamalai for Karthigai Deepam after HIS Chaturmaasyam in South Arcot District in a place called Manaloorpettai. Marathi Swamigal took to sanyasa after many years of government job. But he lost his Dhandam ( The holy bamboo stick carried by a Sanyasi). If a sanyasi looses his Dhandam, the practice is to obtain another stick from another Sanyasi and hence Marathi swamigal came in search of a spiritual master who could give such a bamboo stick. He went right up to Rameswaram and on his way when he came to a village known as Manaloor pettai where Periyava was observing Chaturmasya auterities he stayed with him.

At that time, Periyava was suffering from weakness and hardly could manage his routines. But in spite of such health condition he continued to perform his daily pooja to Sri Chandramouleeswar . In this difficult times, Marathi Swami took care of him including giving bath, though the custom in the Matt is that Shankaracharya should not be physically touched! It looked as though Marathi swami came there to take care of Periyava! Marathi Swami was an ardent devotee of Periyava and as such treated him as his God and guru. though Marathi Swami was twice the age of Periyava. But if you look at the photo, Periyava is standing like a shishya and Marathi Swami looks like a guru. Every day Marathi swami will wash Periyava’s feet with Gomyaam ( Holy cow urine) and after washing he will apply sandal and put flowers on Periyava’s feet and worship His feet. He also used to collect the cow urine with which He washed Periyava’s feet and drink the same. Marathi Swami was so devoted to Periyava.

It is borne out by the following incident. Once Periyava went to Tirupathi (Temple of Balaji) on the Hill. Marathi swami was climbing behind him but he was bit slow in climbing. While Periyava reached the temple and had the Darshshan of Lord Srinivasa and came out and stood near the main entrance of the Balaji temple. At that time Marathi swami reached the main entrance.On seeing him Periyava called the Executive Officer of Tirupathi Temple and requested him in Tamil that Marathi Swami be escorted to inner sanctum to have darshan of Lord Srinivasa (Balaji). Since Marathi Swami could not understand Tamil, he asked Periyava as what was the issue. Periyava who could converse in Marathi and Kannada told him in Marathi that he has asked the Executive Officer to escort him to Ballji temple inner sanctum to have the Darshan of Lord Srinivasa. On hearing this Marathi Swami told Periyava that he is not going inside to have darshan , as periyava who is standing at the gate is his Balaji and from the gate only he returned without having darshan of Balaji. Probably Marathi Swami is the only person who came right up to the Main entrance of the temple but chose not to have darshan as he considered his guru – Periyava as Balaji.This incident is very similar to that of Sri Ramanuja.

Once in Srirangam, Lord Ranaganatha’s murti was brought in a procession for worship by house holds which are located in the street surrounding the temple Sri ramanuja went had darshan of Lord Ranaganatha who came right up to the doorstep of Sri Ramanuja’s residence, one of his disciples who at that time was busy in the kitchen of Sri Ramanuja was instructed by him to go and have darshan of Sri Ranganatha murti did not do so. But on learning about this Sri Ramanuja queried him as to why he did not have darshan of the Lord Ranganatha , the disciple informed his guru, ” For you Lord Ranganatha may be Lord, but for me you are the Lord and your seva is more important, Such was his guru bhakti.