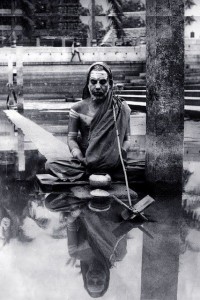 A.S. Raman was the first Indian editor of The Illustrated Weekly of India. He shares his memorable moments with Divinity…

The 107th Jayanthi of the Paramacharya of Kanchi falls on May 19. A.S. Raman looks back nostalgically at the moments he shared with the Swami in 1963.

I had looked forward to the day when I could have the privilege of a brief glimpse of the Paramacharya of Kanchi at least from a distance. At last that day came in 1963. I was at Madurai on holiday.

It so happened that the Paramacharya had been camping at Narayanapuram outside the city. One July morning I decided to take a chance at the Matam. I wrote my local address on the visiting card and gave it to one of the aides who immediately sent it for the Mahaswami’s attention. No reaction. I sat in a corner resignedly prepared for a long wait.

After a couple of hours Paramacharya came out to perform “Gho Puja”. Through I was within his sight he did not take notice of me. Since it was time for his other rituals, he disappeared into solitude office of his private retreat.

Hours passed. No response from him till 7 p.m. I was told not to wait any longer, because it was time for Mahaswami’s evening puja after which he would retire for the day.

This went on for five long frustrating days. But I would not give up. The longer I had to wait, the stronger my resolve to have an audience with him. At last on the sixth day, at about 1 pm I received word from the Matam that “Periaval” would like to see me.

I rushed to the Matam without a minute’s delay. But no, it was not that easy. I was told to wait. After four hours, Paramacharya agreed to see me.

The moment of ecstasy had arrived. I was face to face with divinity in flesh and blood. I was immediately reminded of what Arthur Koestler, a tough, intellectually arrogant atheist and iconoclast said about Paramacharya.

After an audience with him, the controversial author of the irreverent book on India and Japan “The Lotus and the Robot”, said in effect that if God exists, here He is!

Receiving me with the sort of smile one saw only on the bronze icons of deities, the sort of smile about which Koestler said: “If ever Jesus smiled, he must have smiled like this great Hindu saint”, the Paramacharya began comfortingly: “Did you have to wait too long? I was only testing the strength of your faith. Now relax. Before you ask about me, I must ask about you.

His questions reflecting his transparent, fatherly concern focused on my family background, early life, my main interests, details of my professional career, my health problems, if any, my life in Bombay, and the like. He was now in a communicative mode, which prompted me to share my ten-page questionnaire with him.

After a casual glance at the questionnaire, he returned it to me saying, “Read out the questions first, before I react to them. After you have finished, I’ll try to answer one by one. No hurry, we can go through the exercise at leisure.

The real reason for my making you wait for nearly six days was my selfish desire to spend a sufficiently long time with you for a meaningful, mutually beneficial discussion. Now you ask and I answer. Let us settle for a long, unhurried tete-a-tete as the French might say.”

Our two-day long discussions that covered a wide range of areas as divergent as Aristotle and Adi Sankara at one extreme and astrophysics and Atharvaveda at the other, were spread over nearly ten hours, five hours each day. The venue was a most unlikely one; The store room with rats, spiders, cockroaches and lizards all over the place.

Paramacharya sitting on the bare floor rested against a rice sack. As we were talking, the stream of bhaktas from different parts of the world and India continued and every one of them received his attention.

They spoke to him in their respective languages in which he also seemed to feel thoroughly comfortable, handling each of these with the ease and grace of his own mother tongue, Kannada.

To my astonishment, his aides told me that he had a mastery of 17 languages.

Three weeks later. The first installment of my two part article had just appeared in my paper. I went to the matam with the issue. The Paramacharya’s aides has already shown him a copy.

Greeting me with an embarrassed smile, he said gently: “After reading your article I feel taller by a few inches. I wish you had not praised me so much.” I said: “It’s nothing, Your Holiness, compared with what the Western intellectuals keep saying about you.”

To which he replied: “I wish you had praised other Sankara peethams also. You see, we have no protocol problems. We are all engaged in the same task of continuing Bhagavatpada’s mission. You could have avoided that unfavourable reference to another matam an equally great institution set up by one of Aid Sankara’s senior disciples. I hope you will not run into rough weather because of your over enthusiasm for the Kanchi matam.

Placing my copy of the weekly before him, I requested him to autograph it. Politely refusing, he said: “Sanyasis don’t sign. Narayana!”

Paramacharya made every devotee feel specially favoured. What endeared him to his devotees was, not his stunning scholarship, which sat lightly on his frail shoulders, but his intensely humane concern and compassion beyond words and his charmingly disarming humility and transparency. He shared his erudition and wisdom with everyone around.

He could explain J.M. Keynes’ General Theory of Employment or Einstein’s Theory of Relativity as lucidly and gracefully as he would narrate a fairy tale to a tiny toddler. 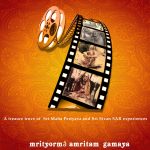